I got my copy of Wizardry from the guy across the hall. He copied the game from somebody else. That's how it worked back in the day. We were the people, copying rampantly at college, who inspired the need for copy protection. 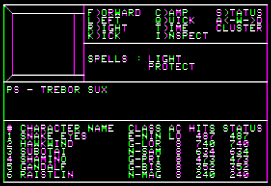 Wizardry itself was published in 1981, so was already three years old by the time that I got my copy in 1984. The game featured ray-traced graphics and bitmapped monsters, all in brilliant 4-color palat, assuming that you had a color monitor. (Back then, color monitors were not a gvien.)

Today, Wizadry would be called a hardcore game. You faced your fate and you faced it without nets, dying horribly and repeatedly. Being intelligent people, we devised our own nets.  We copied off our game disks if we were patient. If we forgot to do that, on learning that your characters were about to die, we simply opened up your floppy drive and stopped the computer from writing your fate onto the disk. Rebooting, we recovered your characters and continued onward.

In building your party, the most reliable strategy was to train up new fighters in the back rows, then change their class to Wizard or Priest. You now had a wizard or priest with many hit point. Eventually you graduated those into bishops, who had two full ranks of spells, meaning that they could dish out damage and heal as well.

It's easy to dis fighters in this game, but early on, they were vital. They were the most survivable character, so that when you hit the bad encounters that savaged your party, they could fight their way out of the dungeon. Of course, bad luck being what it is, you sometimes hit another lethal battle and died there and then. Even so, a long dungeon expedition required that you use your resources wisely, so your fighters did most of the work most of the time. That extended your ability to explore and acquire wealth.

A few mule characters were very useful. Once you had a character that could raise the dead, then keeping him around just to do that save you significant amounts of money. Additionally, you wanted a mule to hold your most valuable duplicate equipment and excess gold. That way, if your party wiped early on, you had accumulated enough wealth that starting your next party would be significantly easier.

Maps were inredibly important in this game. Being pre-internet, we had to make our  own maps. I spent hours thoroughly mapping the 10 level dungeon that was the Maze. As the entire game was featureless raytraced graphics, you got turned around far too easily. The map also featured secret and one-way doors, along with pits to lower levels, just to make your life a little more irritating.

Later on in my life, I acquired carpel tunnel, which I ascribe to the automatic mapping in games. Before automatic mapping, my game play paused as I drew maps, but afterwards, I played without pause, which is very bad for your hands.

I played some of Wizardry 2,3, 4, and 5. I didn't really get back into the franchise until 6, 7, and 8. By then, it had lost its crazy insane hardcore roots and worked far more like other RPGs.
Tags: 1980s, review, rpg
Subscribe