One of the hidden parts of Art Deco is locating point. Rather measure from one place to another, and winding up with some weird number that somebody can't realistically measure, drafting relies on using geometric relationships to locate intersection points. Using a very well known set of procedures, you can mechanically solve geometric math problems. Done by a well trained draftsman, these points will meet across a page with literally pinpoint accuracy. (As draftsmen use callipers, which are literally pins in sticks, this analogy is quite literal.)

If you know how to locate points geometrically, you can recreate the relationships in existing work. You can also more accurate recreate the feel of Art Deco by understanding that points don't exist at random. Geometry determines your important points for you.

Art Deco takes this one step forward, creating shapes and patterns with geometric boundaries. You've seen many examples of such shapes. What you may not realize it that many relationships are created by these shapes, even if you don't see them.

I took one set of typical Art Deco blocks and determined their width based on other shapes giving us guidelines.

Note that pure circles are extremely strong, so they are used sparingly. Ellipses and spirals are used far more frequently.

I am very satisfied with the image. It explains more than I can. You will note many familiar Art Deco patterns in the image. 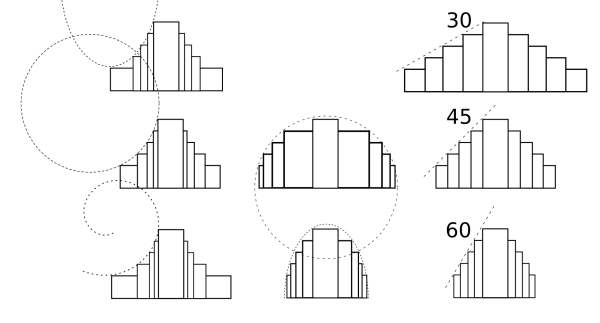 The issue with patterns with that draftsmen used pencils to create what they wanted. They could take a curve and draw just want they wanted, over and over again. For them, that sort of thing is trivial. If you are using a vector art program, you can do the same, but the process can be far more labor intensive, depending on the complexity. This is especially true for wallpaper patterns.

One point that I can't emphasize enough is that there are no random points in Art Deco. Every point must be located through some mechanical means, either directly measuring or geometrically locating.

Douglas Milewski is a fantasy writer who liked drafting class too much. In his recent artistic struggles to produce art deco for his own covers, he found no internet sites dedicated to the technical underpinnings of the art. Seeing a niche that needed filling, he has documented his hard learned experiences. He doesn't claim that he's right, and would very much appreciate it if someone more competent would save him from his own folly.

Because Art Deco was produced by architects and draftsmen in the days before computer, the drawing were produced using entirely different mediums. As is true between any two mediums, some things are harder in one medium and easier in another. The same is true between drafting on paper and drawing with vectors.

I highly recommend learning some drafting, using a table, with manual tools. I do recognize that this isn't always possible, but it will give you more appreciation of the process of drawing. Just like you learn how a painter paints, from sketch to preliminaries, to final product, so too should you learn how a period professional drafted. Art Deco didn't appear in a vacuum. It appeared, and looks the way that it does, because the designers used particular tools to ply their trades. These tools, and the relative ease or difficulty of their use, influenced the creation of the designs.

CAD software, especially the sort designed to produce blueprints, generally works similar to drafting. CAD is an outgrowth of analog drafting, used to create similar effects. While useful, the software isn't designed to produce pretty pictures, so most artists won't be very interested in learning the medium. Some CAD software can even export to vector packages.

More than likely, you will be interested in (or already proficient with) vector software. While this software does wonderful things (I used Inkscape myself), the differences are even greater between vector graphics and drafting. Some accommodation must take place.

The most important difference is how lines are drawn in vectors. With pencil, a line is drawn or not drawn as the drawer decides. The pencil is lifted up and down. I have yet to see any software that can rival this power of the draftsman. Instead, in vectors, object must be intersected or cut, which is always more cumbersome. In some cases, the overhead is small, but in other cases, the overhead is absolutely aggravating.

Draftsmen have french curves for more unusual joins. Essentially, these are compound curves. The draftsmen would use these curves for spirals and the like. More than likely, if an architect chose a curve, he would keep using the same curve for the entire drawing. At worst, he would have 2-3 sizes.

The thing about pencils and curves is that once you have the curve, you can keep drawing the exactly line that you want, as often as you want, through the most ridiculous set of intersections that you ever saw. For him, that was easy, but for you, it'll be a pain in the ass.

If you are designing Art Deco, keep these differences in mind. More than likely, you will do what's easy for vector graphics and avoid what's hard. This will produce pictures that art Art Deco like but miss some element of the feel. The reason is that you are using different techniques from the period. If you want a similar feel, you need to use their techniques. That requires problem solving and more than a little pain-in-the-assery.

Douglas Milewski is a fantasy writer who liked drafting class too much. In his recent artistic struggles to produce art deco for his own covers, he found no internet sites dedicated to the technical underpinnings of the art. Seeing a niche that needed filling, he has documented his hard learned experiences. He doesn't claim that he's right, and would very much appreciate it if someone more competent would save him from his own folly.
Collapse