What did I do this weekend? I busted my ass busting grass. I worked I was tired, rested, then worked again. I can't say that I got very far on the new garden bed, I can say that I got further than I feared as I worked my way into less brutal grass.

I took some of Sunday morning off to help my sister move some big furniture into storage. Damn heavy furniture. She's heading out to Arizona and hopes to find a job there. She's done with DC. I can't say as I blame her.

Dinner on Friday night was the Vegetable Garden, which reputedly ranks as one of the top vegetarian restaurants in the US. In my opinion, that's a fair assertion.

There was some pretty wacky stuff created back in the 70's, and I am loud and proud to have owned one small slice of it, although an objective observer would claim that I wallowed in bizarro as hey, that was the 70's. One of the things that I owned was my first Nintendo, but alas, it wasn't a video game at all. For one Christmas, 1974 or 75, I received a Nintendo Shotracer rebranded as Ricochet Racers.

You can see a video here: https://youtu.be/hJKfkctKrAU. The most noteworthy part of this video is that I had the exact same red and white shirt that the boy is wearing in the video. A second video for a black model is here, https://youtu.be/-k1FZnHTOSY, including innovations such as a three car magazine, no cartridge necessary to load, and glow-in-the-dark styling.

Stylized like a bolt action carbine, this rifle-imitation device fired cars along the floor, presumably to perform stunts, but more likely used to assault my siblings, which inevitably resulted in parental scolding mode. The action was simple enough. You pulled back the bolt to compress a spring, chambered the car in the car holder (what caliber would that be?), then pushed the bolt forward again. After that, you aimed and shot, sending your car across the kitchen floor at high speed, or maybe down the basement steps.

Once I saw the barrels, I recognized this as the version that I had. 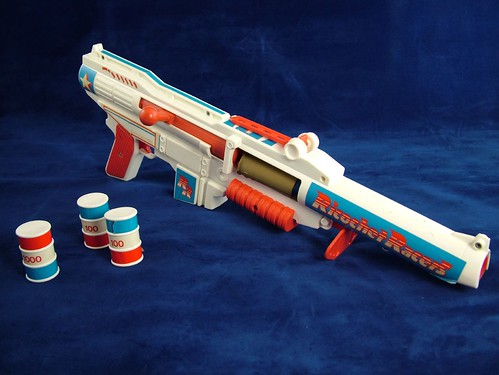 You'll notice the bold red, white, and blue styling. This color pattern was big in the 1970s. When Star Wars Galaxies introduced paint jobs to their starships, I noted that the Millennium Falcon had that prototypical 70's color pattern for one of its designs. I don't think that most of the kids got the visual reference.

The one firm memory that I have of this toy is playing with it in the back hall of the house. Running along the outside of the house, this short hallway connected the kitchen to the den, and hosted both the basement stairs and the downstairs bathroom. I was down on the floor racing cars along, not only because it had an imitation brick linoleum floor, which was perfect for racing cars, but because my siblings had surely camped in other rooms, making that the only place to play.

I have no recollection of the fate of that particular toy. I just presume that my mother scurried it out the door while I wasn't looking. She was good at that trick.
Collapse